Have you ever wanted to ride a BMX bike down a slip and slide, hit a ramp, launch into the air, do a flip, and land in a 12 ft. deep pool? Did you not realize you wanted to do that until just now? On September 27, I got to film that stunt alongside Devin “Super Tramp” Graham and Parker Walbeck at Ohio Dreams Action Sports Camp for Mountain Dew.

For over a year, I have followed Devin Super Tramp on Facebook, Twitter and Instagram because I’m always impressed with the videos he pumps out every week on YouTube. From ziplining/highlining/rope swinging from canyons, to videogame reenactments, to human catapults in the mountains, to snowball fights, to flyboarding, to luging through city water systems, to playing with puppies, the Super Tramp videos are creative, fun, captivating and blood-pumping. They feel very personal yet also like they’re just beyond the audience’s reach.

The videos were shot in Tahiti, Hawaii, Utah, Los Angeles, Africa, Maldives, etc. and viewers dream of being on these shoots. They enjoy the virtual experience through YouTube just as much as the people shown in the videos. If you’re lucky, Devin and his crew may travel to a location near you, blast it on social media for all to come, and you’ll be able to take part in his adventurous world of YouTube videos that you’ve dreamed about.

I was fortunate enough to get this chance, except I wanted to help create this experience behind a camera and be on his set, which is more of my dream than actually doing the stunts in front of the camera. That dream became a reality for me, but I didn’t know my dream would end up being in Ohio.

With only knowing the day before that I would help him shoot, I had gotten in an hour of sleep and was on my five-hour road trip to Butler, Ohio at 4:00 a.m. I don’t remember the last time I was on the road that early, but I would guess to catch a flight. I had never been to Ohio, so I was eager to see that Butler was in a hilly section of Ohio, much like Bloomington is in Indiana.

My boyfriend, Travis, took it upon himself to drive me to and from the shoot, so I could get more sleep and be a bit more rested for a day’s worth of shooting. (The fact that he’s a big Super Tramp supporter probably influenced his decision as well.) The sun rose as we passed through Columbus. By the time we got to Butler, it was a clear, bright day but a bit chilly. Nestled into the hills and gleaming from the sun, the white launch ramp could be seen from the road. It sat behind the still, blue swimming pool that would soon be disrupted from thrill-seeking slippers, sliders and divers.

When I arrived, I got to meet Devin, Parker, Creighton and the rest of the Super Tramp and Ohio Dreams crews. The idea for this video actually came from a fan, when Devin publicized his Mountain Dew Road Trip tour information and location callout contest; a road trip for the fans, by the fans, if you will. I scouted the pool and slip and slide areas, equipped up, and filmed the entire day under the sun on this last Friday in September.

A bunch of people came from all over the Ohio area to bellyflop in bikinis and cannonball in costumes. It was pretty thrilling to be a part of this experience and film this adventure, both of which I am grateful for.

I had a lot of fun meeting people, making connections and of course shooting some visuals especially since it’s for a high-caliber YouTuber such as Devin, whom I admire greatly for not only filming but directing and producing these shoots as well, and of course for his business and marketing skills. And Parker, for his equally awesome camera work and his crazy-cool and hardworking editing. Not to mention Creighton, for his super friendliness and spirit, as well as his cable and rope work (even if sometimes it’s not feasible to rig up in time due to whatever reason). I’m so glad something this fun to shoot came to the Midwest and I can’t thank you guys enough for having me help film it and I’m glad you used my shots! The video turned out amazing, and I’m always free to lend a hand, a camera, a battery, a slider, a lens cloth, a towel to dry off equipment with, etc., etc… Hopefully I’ll see you all again in the near future! An Indiana girl can only dream, again. 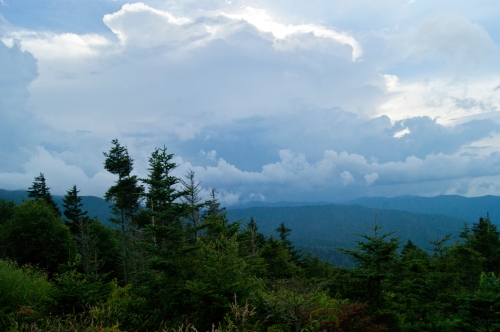 One Sunday in August, I browsed through Instagram and saw that my friend had loaded his car up for his vacation. I knew he had this trip planned, but I didn’t realize he was going solo, just to take photos of mountains and night skies. I didn’t have any shoots or obligations for the week, so I took advantage of this opportunity, with his permission. That night, I packed my bags and left at seven in the morning to meet up with him in Madison, Indiana to travel with him to the Smoky Mountains of Tennessee.

How refreshing it was to go somewhere I have not been, on this trip that was already planned out, just to go photograph mountains, skies and whatever adventure we decided to seek out. It honestly could not have panned out any better for us. We drove through Kentucky and Tennessee and I was sight-seeing the whole way down and back, taking in the landscape. We stayed in Pigeon Forge but hardly spent any time there; we hiked in the mountains for the majority of our time but explored Gatlinburg and Pigeon Forge tourist attractions at night. We went to a couple of shops just to browse, and the only official souvenir we bought were pressed pennies that you crank and press by yourself. Our other souvenirs were more random but personal findings from along the trip, as well as a bunch of photos. We were fortunate enough to photograph a black bear and three cubs, lightning from a nearby thunderstorm, butterflies, trails, horizons, shooting stars at night and the “smoke” of the mountains –the dense fog.

I was pretty much “unplugged” for the trip and tried keeping it that way. However, I decided I wanted to capture my travels and share my “selfies” with my friends on Instagram and Facebook but instead of using myself, I chose to use a finger puppet I won at the fair the week before the trip. The puppet is a tiger named Albert, named after Albert Einstein, and he’s framed in my iPhone to appear as if he is the one taking self-portraits in front of tourist attractions, in a sense to mark his territory or showcase where he has been. I ended up enjoying this small project enough that I have used him on other trips after the Tennessee vacation. I know it sounds weird, but let’s be real, you would rather see spontaneous tiger selfies instead of my face plastered at tourist traps. #TravelingAlbert doesn’t have a purpose, it’s just a photo thing I decided to do. (You can follow him on Instagram #TravelingAlbert.) 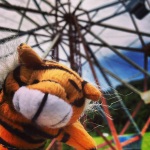 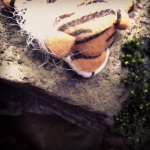 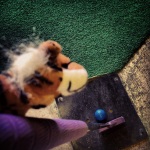 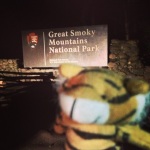 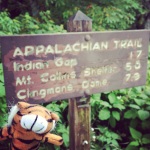 When it’s all said and done, even though I do photography/videography for a living, it doesn’t feel like “work” even when I’m on vacation. I still love capturing memories with beautiful imagery and feel lucky that this is what I do anyways as my job. I could go on some more about my vacation but will keep this simple, and filled with photos. If you have any questions or comments about my trip and want to know more, feel free to ask!